Solutions for everyday use.

This ice melter is environmentally formulated for safer removal of snow and ice. 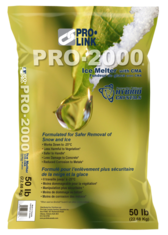 It contains CMA (Calcium Magnesium Acetate), an environmentally benign deicer. Where metal corrosion is a concern, PRO 2000’s special formula creates a bond between the surface area and the elements to protect.

PRO•2000® combines the most effective deicing ingredients; creating the desired reaction to initiate deicing and meltdown. PRO•2000® when pre-applied prevents snow and ice from bonding to the surface area. As PRO•2000® goes to work, its time-released formula stays on the surface area longer, helping to control the freeze/thaw cycle.

PRO•2000® is safe to handle without protective clothing. It does not dry out or irritate the skin.*Non-TrackingWhen properly dispensed, PRO•2000® minimizes tracking on floors and carpets.

Nature’s own ingredients combine for just the right formula. Unlike some deicers, PRO•2000® works to preserve “vegetation and plant life” when used as directed. With PRO•2000®, there is no slimy residue being tracked in, making clean up virtually non-existent.